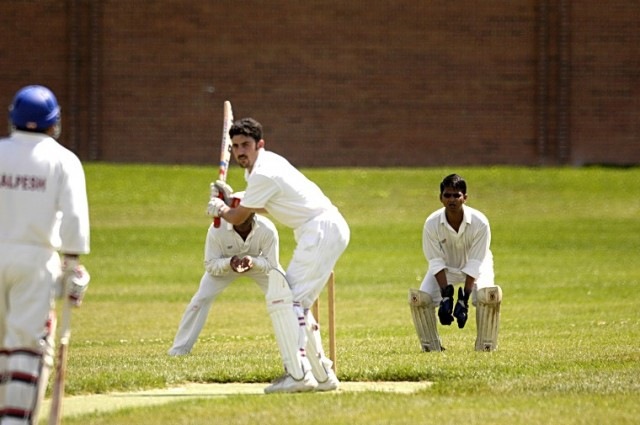 So my busy 2 weeks is finally over. Looking back at all I have actually done in the last 14 days or so, I wonder how I am even able to sit here without falling asleep. Check this out:

Okay, back to my cricket trip. I flew out to Denver at about 10am to connect through to New Orleans. I got thrown about the place because I was flying on Frequent Flyer Miles. This was actually the first time I have ever redeemed miles, I was pleasantly surprised at how easy it was. I knew it couldn’t be perfect, and I found that out by not being able to get a nice and quick connection straight to San Antonio. I could have if I wanted to spend 40,000 miles, but chose to spend 25,000 miles in what was called the Saver Plan or something. Whatever, 15,000 miles wasn’t worth getting there fast. I did miss our Friday afternoon practice at the ground in San Antonio, that was a pity.

I saw New Orleans from the air, while you wouldn’t really know that the city was flooded just a short time ago, it was definitely very swampy and water logged looking on the outskirts of town. I have no idea if this is normal in Louisiana or if it is a result of the Cyclone. But it was noticeable and kind of fascinating, being my first ever look at the city.

I finally arrived in San Antonio and got the last part of the practice session, catching and fielding. Unfortunately I hurt my hand and it would play on my mind for the rest of the weekend. It’s the area below my right pinkie and it’s still a bit swollen and bruised. It’s a recurring injury from last year, something that sometimes happens but typically goes away after a couple weeks. I might consider changing my style of catching, but that’s hard to do because I honestly haven’t dropped a catch in 2 years. I guess I feel I should take the pain and continue with what works.

Saturday we played Houston. Generally speaking, they are a level above our league. Maybe a few levels. If you take a look at Colorado, we have a total 9 teams in the league. Houston alone has 33 teams in 5 divisions. Dallas has something like 36 teams. And Austin has 14 or something like that. The talent pool in this region of Texas is huge. High Tech industry down there really attracts youngsters from the sub-continent (India, Pakistan, Sri Lanka) who are quality cricketers but decided to pursue careers in the USA.

In 2004 Houston thrashed us. In 2005 we gave them a scare on our own turf. Now in 2006 we not only scared them, but jilted the proverbial crap out of them. We actually had them in dire straights before they managed a small recovery and finally built a score of 197 runs. They had actually cheered when they won the toss, because they were expecting a score of 350 or 400. Arrogant pricks. We should have had them all out for 161, but one of our fielders made a mess of a catch. However, 197 was very gettable but our batting lacked teeth and we folded for 142 runs.

I personally received a disgusting decision from the umpire to be given out. I can never say we would have won the game if it wasn’t for that, but it was still a bad call nonetheless. For the cricket follower I was given LBW to a left arm spinner while taking leg stump guard and attempting to swipe a ball easily going down leg, to the boundary. It should have gone for four or six as it deserved, but being early in my innings I mistimed it and got hit just below the groin. While batting, when you get hit on the leg you generally get a sinking feeling if you think it might be given out. This did not even cross my mind and I was utterly shocked to see the umpire raise his finger and give me out. Apparently, later the Houston blokes congratulated the umpires on a good officiating job (and I agree they generally did terrific) but did mention they feel my decision was a poor one. Nice to hear, but all too late.

So we’ve still yet to beat Houston, and this was our greatest chance yet. On to Sunday, we had a point to prove against Austin. In 2004 we caused a huge upset by beating them, I took one of the better catches in my life to swing the match in our favour. I was fielding at mid-on and the ball was hit high and over my head. I turned and ran in hope to stop it from reaching the boundary, however at some point I gave an almighty dive as a desperate effort and managed to pull off an absolute stunner of a catch. In 2005 we had them reeling, before one guy came in and demolished us and won the game for Austin. I will note I was not in the 2005 team.

Come 2006 we batted first and virtually everyone contributed in scoring good runs. We did very well, that I didn’t come into bat until very near the end. With the job of scoring as quick as possible, I hit four quick boundaries in finishing with 20 runs before tamely hitting a slower ball straight to a fielder. Our team finished with 255 and had Austin creamed before two of their batsmen got together and forged a wonderful recovery mission. They were actually on the verge of becoming dangerous to our cause when I was given a chance to bowl. I removed both of them with a great spell of bowling, and actually also bowled the last guy to ensure we won emphatically. Austin managed only 164, but after their terrible start this was a fine effort.

Saturday night we had a banquet for the tournament, the idea here was holding it on Sunday after the tournament would be a bad idea as players would be wanting to get home to their families and rest before work on Monday. I guess the thought is nice, but it was a dumb idea. Instead of having awards (since the tournament wasn’t complete yet) we had to sit through each League President talking about their respective leagues and thanking various contributions from various personnel. In the end we literally sat through some people being thanked multiple times. The food was great, the speakers were ultimately boring. As a joke while leaving, a few of us thanked different team mates for random and stupid things over and over again.

The ride back to the hotel was very funny because we were an hour away and my car load of Indian friends decided to teach me some Indian swear words. They had me call the captain of our team and say a phrase, before cracking up in laughter. His initial response was something like, “What did you just say?” before cracking up himself and telling me to tell Jarrar (one of the perpetrators) basically the same thing. It was very funny stuff. Sunday morning I greeted our League President with a handshake and a friendly, “Max, how are you asshole” in Hindi. He was blown away and again everyone roared with laughter. Imagine being told that when you’d never expect a person to know any of your native language, especially Hindi. It was highly comical stuff.

Sunday night we had a fantastic dinner at a Mexican restaurant with most of the team. We had so many funny stories and experiences to share with each other, we really should have done this Friday night before the weekend. It was an amazing bonding experience between players of various teams (in Colorado) before we all went home to go back and square off against each other in league play.

As I mentioned in my bullet points above, we got up at 3am Central Time (2am Mountain Time) to pack, check out, return the rental car, get to the airport, and fly out. Most of the guys had a 6am flight and I had a 6:25am flight. For some reason my schedule home was easy, just one connection in Denver. These guys had to go through Dallas. In any case, I landed just after 10am and went straight to the office. It was a long day.

In all reality, it was a long 2 weeks.

We are the champions!