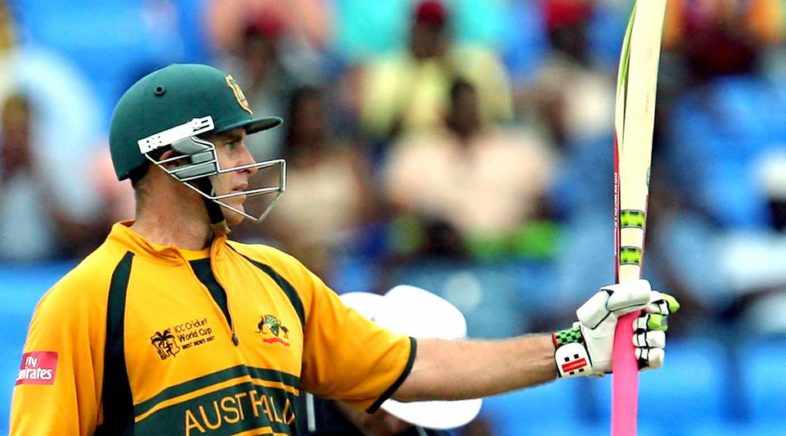 If you don’t feel like reading, skip down to the 7th paragraph to see my point.

Easily the most anticipated game of the World Cup to date occurred between Australia and South Africa on Saturday at St. Kitts and Nevis in the Caribbean. Current world rankings have South Africa at 1 and Australia at 2. A top of the Pool A table clash with more than just pride at stake, the opportunity to advance to the 2nd stage with a crucial 2 points head start. Australia are defending World Cup Champions and were initially favourites to win the whole thing.

Throughout January and February we smashed England and New Zealand into submission during our annual tri-nations ODI competition. Finishing the preliminaries with a record of 7-1 (having already whitewashed the Ashes, our priority, our number 1 goal) was pleasing to say the least. I would have forgiven Australia for taking a step back in the ODI’s, brought in some youngsters and played with the line-up a bit.

England somehow made the Best-of-three finals, it’s fair to say that it is only because New Zealand played worse than they did. In the first final we slipped up and didn’t post the score we should have; Hayden and Ponting were absolutely cruising and a 300+ score looked on the cards. England won the game with 3 balls to spare after Paul Collingwood scored a hundred and secured an unlikely win. He’s a great fielder but I still think he’s an average bat. I’ll criticize him until the day I die for the stupidity he employed on the final day of the Adelaide Test – Sunil Gavaskar would have been proud.

The second final saw England post a decent total of 246 before rain intervened in the Australian innings *three* times. How did Duckworth and Lewis decide our fate? By altering the target of 246 from 50 overs at 4.92 an over to 187 from 27 overs at 6.92 an over. Are you scratching your head? I am. Incidentally we slipped up and lost the 2nd final by 34 runs. England had sealed the series win and went home having won something.

The cricketing brain trust decided also that we needed to play a further three ODI’s in New Zealand – the new “Chapell-Hadley Trophy”. It is fair to say that after an exhausting Ashes and ODI campaign and the imminent World Cup looming, our players deserved a rest. And such as it is a portion (healthy portion) of our stars decided to take matters in their own hands, they abstained from traveling to New Zealand and rested at home instead. But we are expected to perform always, and with our new look mix-n-match team headed to New Zealand to pound their bowlers into submission. Problem is they pounded us back slightly harder. Good on them for winning the series 3-0, New Zealand fans probably deserve some joy over their widely regarded bigger brothers. What gets me though is how suddenly everybody wanted a slice of the pie to have a crack at Australia. We’ve been criticized over our rotation policy. Our harsh perform to play type policy. And now I read India are considering taking a similar approach. INDIA!

Here are some headlines and quote snippets after our 5 losses in a row.

How Australia fell back to earth.
The Australian line-up (is) unsettled and unsure of itself.
Forget that piddly little Ashes urn.
Australia in turmoil for cup.
Australia look gone to me.
Australia cannot win Cup, Sir Viv says.
Can we beat Scotland?

Fast-forward a month to a month and a half, and we have the following adjectives and superlatives:

Rampant defending champion Australia.
No other sides (SA and AUS) look as certain for semi’s.
Aussies put up a chilling sign of class.
Proteas put in their place.
Oz now 6/4 after SA romp.

What a difference a month makes.