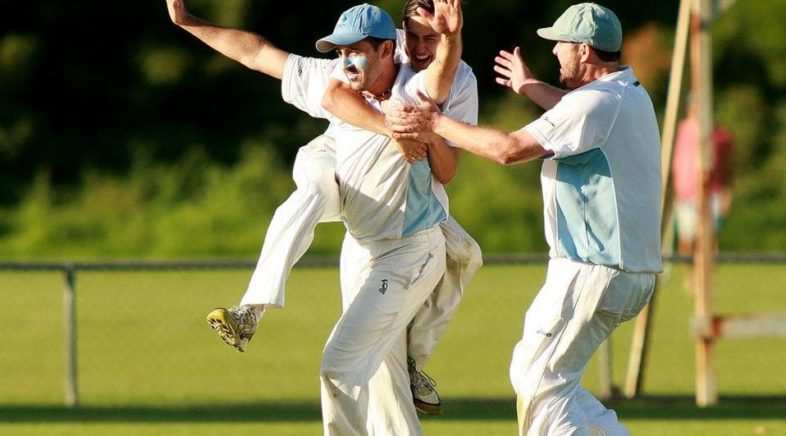 Undoubtedly the rivalry of the season in 2nd Grade were the clashes between the Northern Districts Butchers and the Wollongong Lighthouse Keepers. Not only did they finish just 2-points apart on the ladder, the matches between the two went down to the proverbial wire on both occasions. Therefore it was only fitting that the finale would offer the ultimate finish between two teams you could barely separate all season.

Ties in cricket are a rarity. Ties in finals rarer still. What eventuated at Figtree Oval on Saturday 23rd March left CI Management Committee Representative and Wests Life Member Neale Benson scratching his head as to the last time such a thrilling climax occurred in Illawarra Cricket. You just can’t think of any.

Those final moments brought back memories of the 2011/12 Grand Final between Wests and Northern Districts. Same ground, match in the balance, the final play at the same end. Photographer Rob Sheeley there on both occasions to capture the timeless classics.

With nine wickets down and one run to win, Wollongong batsman Sam Mutch tried everything to pierce the field or steal a single. Four balls in a row were heart poundingly stopped by a desperate Butcher side… until the 5th. Mutch blasted it to mid on and took off for the winning run. Michael Doig fielded cleanly and paused – missing meant losing the title. Hitting meant a tie and a Premiership to the Butchers. All eyes watching – the moment was immense. Doig pinged a direct hit on the bounce at the bowlers end and turned to the grandstands arms aloft. Moments later eleven players were a tangle of euphoria. Supporters rushed on to the field and joined in. This was a get out of jail victory like none other. At 9:30am, when both teams arrived at the ground, no one could have anticipated such a climax.

With the rules re-write this year offering a favourable advantage to the higher seeded team batting second – that is they could “win” by not being dismissed even if not reaching the target – in a 1-Day match – there was plenty of talk around all grounds as to the best method. Surely you win the toss you bat. This is the age old adage in cricket – Finals pressure does strange things to a man and the runs on the board is always advantageous. But these new rules meant you could, effectively, stonewall in the hopes of being able to last 55 overs and win yourself a premiership. If you were the higher seeded team. And this Northern Districts was.

Perhaps all too kindly the pre-match discussions, arguments and points-of-view were negated when Wollongong called correctly and sent Northern Districts in to bat. Wollongong had successfully chased in both previous encounters – the first a remarkable come-from-behind win when turning 8/79 into a match winning 9/165 and the second a similar 7/173 when 6/106 at one stage. Northern Districts wanted a solid outing today from their batsman to apply pressure later on.

Unfortunately for the Butchers this didn’t happen. The top six succumbed to direct bowling – two were caught behind, two bowled and two trapped LBW as Wollongong displayed rightful delight at their golden start in the big match. Of the top six only one passed double figures – Justin Brancato – who also hit the first boundary of the final with a vicious hook for four from the bowling of Welsh. At 3/30, 5/41 and then 6/60 this was the only highlight in a dour opening hour of cricket. When Brancato fell – the second of the caught behind’s – Ant Sheeley (6) joined Michael Doig (66) for a passage that can only be described as gritty, boring and unattractive cricket. Sheeley’s 42-ball six and Doig’s uncharacteristically similar approach – blocking three maidens off the spinner at one point – ensured the Butchers would stop the rot for a time. Sheeley recollects quite comically that he was amazed at how a team completely on top were abusing each other in the field. His patience, his resolve was actually even more remarkable than his 6-from-42 suggests; at one point Wollongong dropped their one slip in favour of a short cover only for Sheeley to guide the next ball for three.

Slowly the two chipped away in their twenty over partnership, when on the rarest of rare occasion a loose ball was offered it was generally taken. Leg spinner Dodds dropped short only once in eleven overs but it did disappear over the square leg fence. This is how it was until Sheeley played on with the score reading 7/96. Enter Graeme Sismey (22) – enjoying his most golden year with the bat and a renowned big match player. His is only one way and that is attack – though a few mishits did highlight the fact the pitch was not the easiest of affairs. A couple brutal murders through and over cover saw the score quickly tick up past 130 – meanwhile Doig registered his half century in a career slowest innings performance. Just as the “Scissor Sisters” seemed to be getting away, tragedy struck. Sismey missed a straight one and quickly thereafter Jed Austin also and suddenly the Northerners were in danger of not making 140. Steve Bond (0*) hung around – as is his wont – to ensure 50 overs were reached as Doig farmed the strike. With 150 passed and five overs left (the final a 55-over fixture) Doig decided to hit out. A full ball on his pads was clipped straight to square leg though and the end had come – 151 would have to be enough.

Youngster Kain Flynn-Duncombe was easily the pick of the bowlers with 5/27.

Earlier in the day 1st Grade ‘keeper Jacob Hand announced, “150 will be enough to win this.” The bloke is one run short of being a bonified Prophet.

What the Butchers needed was an early wicket and this they achieved when Kurt Majoor was trapped in front when missing a full toss. The joy was short lived though as former Butchers Paul Chrostowski (52) and Saxon Wright (24) slowly took the game away. The score at one point read 1/30 off 19 overs – slowly is justified in the product description. The two preserved their wicket and hit the occasional boundary only when something really loose was offered – the recipe of the day. Tight bowling and difficult batting – but a Premiership was on the line. Season bowling hero Steve Bond (44 wickets), Semi Final hero Jed Austin (6/9) and all-rounder Doig threw absolutely everything at Wollongong – to no further avail. Ant Sheeley purged another 8 frugal overs from the allowed 60 (another rule change) and Sismey was introduced also – but Wollongong plugged along and when the score read 1/69 after 30 overs things were bleak for the Butchers.

Against the run of play though Wright top edged a leg side flick that Doig was able to grab in a half dive at short fine leg. Immediately following was a mix up with the incoming batsman as Austin fielded a full length dive at mid wicket and fired the run out throw to Brancato at the stumps. Suddenly it was 3/69 and things were changing. A big wicket was Welsh – he had scored a half century in one of the earlier matches – and when he holed out off Toby English to a juggling Austin at deep midwicket on the stroke of drinks – the Butchers took the water break buoyed.

Chrostowski registered his half century shortly after resumption and looked increasingly the largest threat to Butcher aspirations. But in five frenetic minutes Graeme Sismey cut a swathe through the middle order. First he accounted for the top scorer with a mishit dolly to English at mid on. He then punctured Hannam’s defenses and wrapped Dean Majoor in front, 4/93 had become 7/98 and the Butchers were swarming on the back of Scissors’ four wickets. The last remaining obstacle was Dodds Sr, a thorn in the side all year and appeared to have him when he sent a lusty blow to long on. Unfortunately the usual reliable Doig misread it as a mishit and came in too far – only to need to suddenly jump in vain attempt at a one handed grab – and give Bond his first wicket. Alas the ball evaded and crashed into the cement at the base of the fence on the full. A vexed Doig explained to the Umpires he wasn’t sure if the cement was part of the fence, a discussion ensued and eventually Dobinson raised his arms to signal maximum.

Dodds then proceeded to plunder the attack for a number of boundaries and looked dead set to carry Wollongong home. Austin finally earned his reward though with a right castling, a peach of a delivery to end the danger man and set the score reading 8/128.

Hancox and Mutch mixed peculiar aggression with stout defence – which worked – to take Wollongong to the threshold. Before a most peculiar interruption occurred.

With the score 8/146 and six runs needed for victory, Welsh ran onto the field with a sheet of paper. After a minute or two everyone had gathered to understand what was going on. The report was that one books’ bowling added up to 146 and the other 150. However, neither scorebook was presented, simply a handwritten calculation on a separate piece of paper. Strangely enough this was accepted as ample evidence and the instruction to adjust the electronic scoreboard to 150 was granted. The Butchers were fuming, now one run to tie and two to win. Rhys Marsh then called on two final tricks; his rotation and application during the defense of a low total was sublime – keep in mind he is 19 years of age. He tossed the ball to Doig at one end and kept Austin at the other. Quickly though the scores were tied with a single before Doig extracted an edge and Brancato eagerly accepted. With the scores locked, one wicket in hand Doig was unable to purchase the final wicket… but did not go for any runs.

And fitting that Austin, a young player himself in this side, would be tasked with what would be the final over. That pressure to not bowl a wide incredible. The desire to get that final wicket and earn glory for the team. It wasn’t until the 5th brutally quick and accurate delivery did Wollongong chance that deadly final run…

A season that will be best remembered for the number of victories from the jaws of defeat. Rediculous come from behind wins on the back of performances such as Sismey’s 75 v Corrimal, English’s 78* v Port Kembla and Doig’s 44* v Keira. And the fact that Northern Districts won the Premiership having never beaten the other Grand Finalist. Player of the Final: Michael Doig

As the higher seeded team, NDCC claim the title.