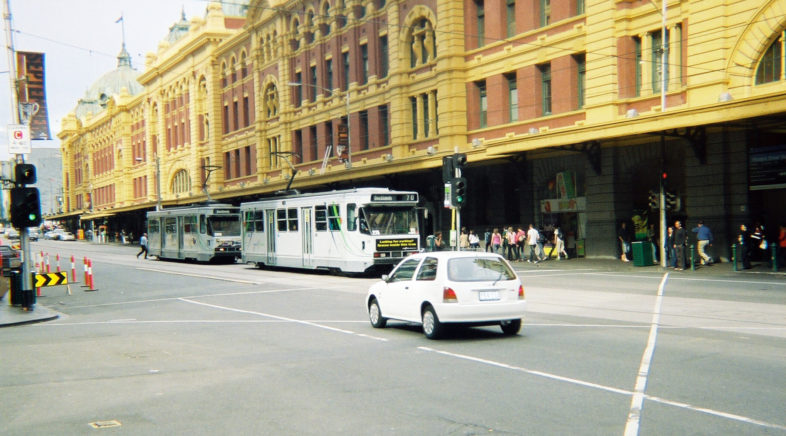 G’day,It’s 7:51am but my laptop reads 3:51pm, yesterday. Why is that? I am currently in Melbourne, Australia. The buzz of the city center is making its way into my room. Another city tram passes by. The Australian morning news is on TV – it’s great to be home. I’m here for a week for work. But it was quite almost an ordeal getting here…

I started in Durango, Colorado where my puddle jumper to Denver was delayed just over an hour. As my connection time had been one hour and a half, my connection was down below half an hour. In the end it was 15 minutes. As it was so tight, a backup plan was setup for me by the friendly folks at United Airlines; listen to this – via Chicago. Going a long way east to head west. I am glad I ran to from gate 59 to 38 in Denver’s B-Terminal in good time to make the connection.The flight to Los Angeles was good, thankfully the 747 leaving for Australia was very nearby to the gate we came in to. It was already boarding. However while on the tarmac is was discovered we had a faulty air conditioner and had to return to the gate for repair. Another hour or so lost. Finally in the air we made it to Sydney half an hour late, in a grand total of thirteen and a half hours, not too bad. I swear it used to take 15-16 hours to fly from the USA to Australia. The time has really come down. Then a quick hour flight to Melbourne, where I had a friend pick me up and we drove around the city.

I had lunch with my good friends Troy and Yvette, watched a little cricket at the Casino and went to bed early. I crashed at around 7pm and slept for 12 hours.

On Tuesday I attended the first day of the Tradeshow and made contact with a number of vendors, looked at a lot of new technology (which I always love to do), had lunch with Troy again, did some downtown sightseeing and bought some clothes. I was planning on going out for a few drinks but might do that tomorrow.

Thursday I plan on spending the evening with my relatives; one of my cousins is competing in a Calisthenics competition and I see that as a good chance to stamp some time into their lives. Considering I spent a grand total of 2 days in our lifetimes with them this past February, I owe them all some more time. It should be fun.