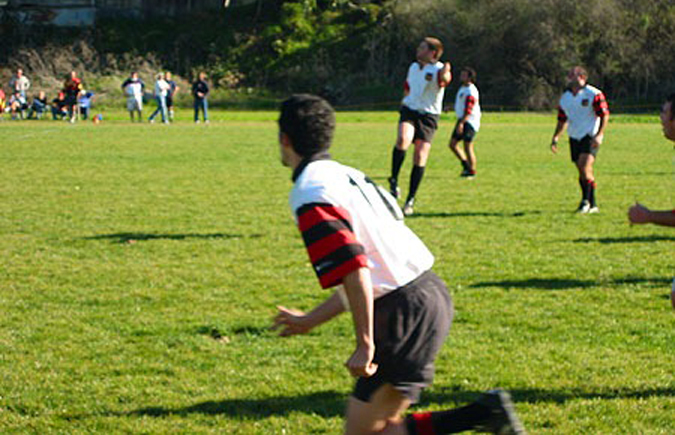 Round 2 of the rugby season, here is the match report:

I remember a bleak day for San Luis Obispo rugby at the end of the 2000 season. We had moved our home game from Riverbottom to Atascadero to promote the game in the north county. Our opponents that day were the Huskers from Kern County, and San Luis hopes were positive that we could salvage some pride from a disappointing season. The outcome couldn’t have been further from those aspirations, as a rampant Kern XV obliterated us by around seventy (yes, that’s right, 70) points in a crushing, embarrassing defeat. Those players who were around that day, and in years before have many memories of solid defeats, though none as humiliating as that game) at the hands of the boys from Bakersfield. Kern has owned us for the last 4 or 5 years, inflicting many mental and physical scars in the process of scoring 9 consecutive wins over the SLO club.

Every streak must come to an end, as they say, as did San Luis Obispo’s on Saturday at Riverbottom.

The day didn’t start well for the Huskers, who arrived to discover they had forgotten their jerseys, and would have to take the field in SLO’s reserve uniforms. And things didn’t get any better for them when San Luis shot to an early 17-0 lead twenty minutes into the game. Flanker Jeff Bailey opened the scoring in the twelfth minute, taking a well timed quick tap and barging over from 10 metres out. Eight minutes later, a slick backline movement created just enough space for Michael to scamper 50 metres in his usual elusive fashion. This try was built upon by a penalty minutes later, as it seemed the floodgates might be about to burst open.

Kern, to their credit, would not lay down and began to mount their comeback. What followed for the next 20 minutes will go down as one of the great defensive efforts the San Luis club has ever seen. After advancing the ball to our 10 metre line, the Kern forward surged relentlessly time and time again, only to be stopped dead in their tracks by a brick wall in the shape of a proud SLO defence. Kern at one stage had 10 phases inside our 10 metre line to come up empty handed, remarkable as they have one the biggest, most intimidating packs in the league. Finally, the Kern pack found a gap in the line and crossed right on half time as the San Luis players had tackled themselves to a standstill. Halftime score 17-7.

The second half was a little more open, as tired bodies translated to looser defense. The play moved up and down the field without either team gaining the ascendancy, but it was a penalty to San Luis Obispo that opened up the lead to 13 points. A short time later, a failed kick for touch proved costly for SLO, and Kern’s devastating loose-head capitalized by scoring in the corner. The conversion failed: SLO 20, Kern 12.

San Luis Obispo needed to be the next to score, and they were with yours truly slotting a long penalty to give an 11 point lead, and then in the final minute of regulation time, veteran prop Craig Marlo put his head down and found the try line to give SLO the safety cushion they needed. Kern’s rampaging prop crossed for his third try of the day in injury time, but to no avail as there was no time for the kickoff.

Hats off to the entire SLO fifteen, particularly the forwards who played the collective game of their lives and were hungrier than their mean, heavier and more experienced counterparts. Scott Lucas, in only his second game on the flank was a standout in a forward pack that were outstanding to a man. The eagerly anticipated return of star number eight Ross Moriarty didn’t disappoint, and rookie prop Craig Thorstenson made some inspirational hits to keep Kern on the back foot. Sean Bolduan showed enough spark to show that he could become a fixture in the centers, and the backline, who took a backseat to the forwards this day, showed a glimpse of their capabilities in open play.

In another first for several years, SLO fielded a completely fresh B side with only two exceptions, which is an indication of the growing player depth of the club. They were gallant but well defeated on the day to the tune of 42 – 14. Led by stalwart Reggie Greenwood, they showed great potential and will only get better with every game.