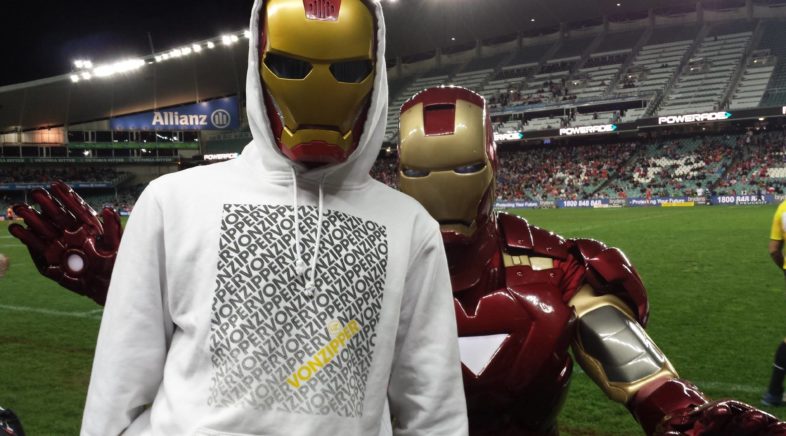 Looking back on 2014, I suppose the highlights could be summarized like so:

Australia whitewashed England 5-0 to win the Ashes back. I was due to be there on Day 4 in Sydney, but we smashed England inside 3 days… no bueno.

All the boys have now abseiled, after we spent the day up at Mt Keira. Nevan has really taken to the sport (including rock climbing) and has already sunk hundreds of dollars into his own gear. Pictured is Liam abseiling for the first time.

Nevan turned 14. As is his wont these days, he invited a bunch of mates to sleep over in the granny flat, before a number of us head off to the ever popular Trampoline centre to practice our front and back-flips. No one was injured.

Mum had the pride and the opportunity to pin Liam’s 2014 school badges on during a school ceremony at the start of the year.

Liam and Zoe began their School Captain roles. They’ve been inseparable since Kindergarten, despite Zoe moving overseas for a year, but they were back thereafter, thick as thieves. Wonderful to see them lead their school together.

Hayden started school. This was going to be interesting, as Hayden is the most bull headed of the lot. Lucky we have Mrs Bell, one of those teachers you just love from day 1. She has taught all of the boys now.

Nevan broke his finger playing soccer at school, which required a k-wire and eight weeks out of sport. Further, he missed prime rock climbing season and was actually pretty bummed for much of it.

Now regularly playing golf with my high school mates from Townsville: Rob, Dennis and Shane. Nathan would join later in the year. The goal is to hit a different golf course every couple months, depending on Rob and Shane’s schedule – who are both in the Navy. Townsville is a long way from Sydney, it’s fantastic that so many of us are within reach again after so many years.

Liam turned 12, the tradition is to have a Zone 3 Laser Force party, which we did. Video games, laser tag, pizza and cake – you can never go wrong.

Dad visited for Easter to spend time with the family. Nevan proves he is now taller than grandpa.

Caving the Borenore Caves outside Orange, NSW. We actually spent the long weekend in Orange for the Food Festival, but for the boys this was the highlight of the trip.

My younger boys (finally) got into Rugby League this year. We’d don all our colours and would head to a number of games this year.

Hayden turned six at the end of April, had a big birthday party with everyone in his class at the start of May. Below is the Marvel / DC crossover cake that Jenifer baked.

After six years of trying, Liam finally qualified for District Cross Country in his final year of Primary School. He never gave up and can always say that he made it.

Vivid Sydney lived up to its name. Had been meaning to visit for a few years now, finally got around to it. Pictured is the Sydney Opera House in full, technicolour splendour (before it changed to another design altogether).

May marked a departure from Solutions Outsourced and a new beginning with the data team at Tom Waterhouse where I’ve been readily embraced as an integral senior member and team lead, fulfilling the role of a SQL Server BI Manager.

NSW finally won the State of Origin, an eight year hiatus and the first series win since I moved back to Australia. Pictured is Liam in his NSW State of Origin Jersey saluting the parochial Parramatta crowd. He’d later manage to get Jarryd Hayne to sign it…

Katherine’s first footy match – Parramatta vs Newcastle at Parramatta stadium. For the record, every game we attended in 2014 was a loss…

At ten months and a day, Katherine started walking. Months and months (and months) ahead of her brothers.

Now regularly catching up for “Gentlemen’s Drinks” in the city, every month or so. Miko, Brett, Brendan and Peter – fine developers (and graphic designer) who once all worked together.

All the boys attended the Iron Man v Captain America NRL match (Dragons v Roosters), the smaller boys were picked for Half Time entertainment on the field – meeting the “real” Ironman and Captain America. They came home with bags full of swag. The Superhero Round will hopefully gain momentum and continue for years to come.

I skydived. Something I had been meaning to do for a long time.

Our daughter Katherine turned one. We held a large birthday party at the beach, with friends and family from all over coming down for the day. Thank you to all that came, there are plenty of photos in my Facebook album.

We attended the first ever A-League (preseason) match in Wollongong. Sydney FC v Wellington. It was a 0-0 bore-fest, luckily I subscribe to NRL mobile, watching a 32-30 classic between the Roosters and Cowboys.

Uncle David visited from Leeton, NSW. Spending a few days with us as part of Katherine’s 1st Birthday, Hayden took the opportunity to teach his Great Uncle how to play Minecraft.

Nevans’ soccer team took out the League Championship, an enjoyable year in his first year of the sport. Despite missing at least a third of it to injury, Nev thoroughly enjoyed playing with (and against) a bunch of his high school mates.

Nevan qualified for State in Discus, competing at Olympic Park in Sydney. Alas, he never made it further, but still a huge effort from the man child.

Liam won Forward of the Year for his Rugby League side. Starting off on the wing, he was thrown into the deep end  mid way through the season when shifted to the second row. He broke the line on his first ever play and never looked back.

The arrival of Spring always brings the carnival into town. More and more we enjoy watching big brothers look after little brothers.

Liam and I drove to Canberra for the last regular season game between Parramatta and Canberra. It was supposed to be the win that would see the Eels through to the finals. Not only did we lose to the underdog (thus missing the finals) but it would turn out to be the last time we (likely) see Jarryd Hayne…

Brought the two soccer boys, Nevan and his mate Erik, to our catered box at the Sydney Football Stadium for the A-League local derby between Sydney FC and Sydney Wanderers. An amazing night in front of a sellout crowd restored some faith to the sport. Sydney FC won 3-2.

Liam dazzled at his Year 6 formal, going the teal and purple stunner deal route. It’s always mixed emoitions to see these kids, who have spent seven years of their lives together, share one last event together.

Jason Mraz was playing in Sydney, weren’t going to miss the opportunity to see this talented individual. Great concert.

Merry Christmas. This years’ photo failed. It was one of those “let’s do the same photo as last year” (which was a great photo). Ah well, always next year.