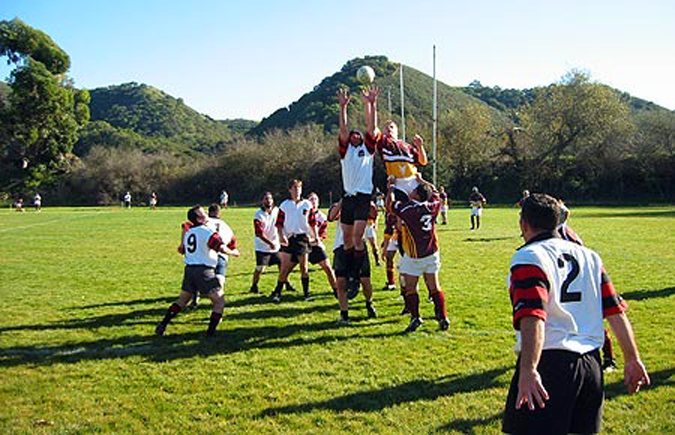 The first game of the rugby season, here is the match report by captain Lief McKay:

In a see-sawing affair at Riverbottom on Sunday, San Fernando Valley overcame a rusty San Luis Obispo outfit to the tune of 40 – 21.

The first score of the game was in the opening minutes when the Valley boys scored a soft try out wide, capitalizing on a lapse in concentration in the defense. San Luis Obispo again demonstrated their tendency to be slow starters, when they conceded their second try in as many minutes.

The SLO XV started to kick into gear, and got on the scoreboard with a penalty goal in the eighth minute. Minutes later, Deron Brewer finished off the try of the day after a sweeping backline movement, involving more than half the team, gave him just enough space to dive over in the corner.

Half a dozen phases following the restart, Michael picked up a loose ball from a Valley mistake, and wove his way through four defenders to score a brilliant solo try as SLO went up 13 – 10. Consistent with the pattern of play to that point, San Fernando hit back quickly to register their third try. Fortunately for San Luis, the San Fernando kicker wasn’t on his game, as all three tries went unconverted. Ten minutes before the half, yours truly potted a drop goal to give San Luis Obispo a one-point lead at the break.

The second half was a carbon copy of the first for the first 30 minutes, as both teams desperately tried to gain an advantage, and it was the San Luis defense that cracked first, allowing a try and two penalties. San Luis hit back as Michael scored his double, chasing down a deep kick from flanker Ben Green. SLO was only trailing by a couple of point, and the game was still anyone’s. San Luis Obispo appeared to be building a promising succession of phases when disaster struck – a misdirected SLO pass found its way into the hands of the most dangerous player on the field, the Valley fullback. He sprinted 40 metres to score under the posts, to all but break the back of the SLO team. In a disappointing finish, San Luis Obispo turned the ball over on the Valley 15 metre line, and they took the ball 85 metres to score right on full time.

The two late Valley tries really blew out the score, in what everyone would agree was a fiercely contested, even game. For San Luis, Jeff Bailey playing in the unfamiliar position of Number 8 was involved in everything, as was Scott Lucas, playing in the backrow for the first time. It was promising to see the return for San Luis Obispo of center Forest Nielsen who had a solid game.

In the end, turnovers in rucks proved very costly for SLO, who could easily have won this game if their mistakes were reduced. In the forward pack, stalwarts Andy Adams and Ross Moriarty, both former MVP’s were missed, for both their leadership and skill.

After the game, Larry Ferguson presented the San Fernando coach with the Chobham Ball- a trophy contested each time these two old foes play. It was hard to give away, and we will endeavour to win it back later in the season!

Kern County travels to Riverbottom next week for what should be a torrid battle.

Blazing in the middle