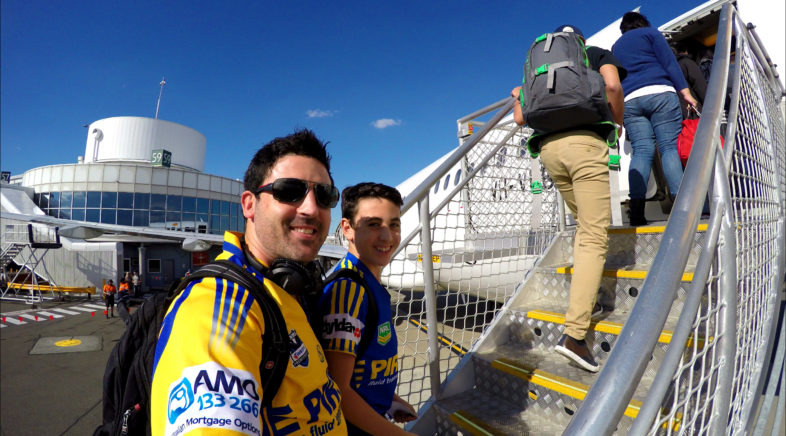 This young man becomes a teenager tomorrow. Liam is whole hearted, intelligent and has a beautiful soul. We’re heading up to Brisbane for the ANZAC Day match between Parramatta Eels and Brisbane Broncos for his birthday. He just doesn’t know it’s in Brisbane yet… 😉

The surprise was fantastic. I had him wear his Parra Jersey because “you always support your team, even if you are going to another game”. He suspected nothing at the Wolli Creek interchange, but as we departed at Domestic Airport I ran out of time fast. It went something like this.

M: Mate, is it okay if we change plans?
L: What? (confused)
M: Which game do you wish we could watch?
L: Eels and Broncos
M: Then, let’s get on a plane and go!

The immediate shock and following beam was priceless. A moment to savour.

Having arrived at Suncorp stadium, we were treated first to spine tingling New Zealand (both languages) and Australian anthems during the ANZAC Day match between Parramatta and Brisbane. For those overseas, this is the 100th Anniversary of the Gallipoli campaign – Lest We Forget.

Parramatta did not finish their sets well, despite making plenty of metres all game. Despite Brisbane not playing much better, Brisbane went on to win 28-16 to put only a minor dampener on our weekend. When you fly in from Los Angeles on Friday to fly out to Brisbane on a Saturday, you’re living the rock star life. Suffice to say, he saw in his teenage years well!

My Gallery is back