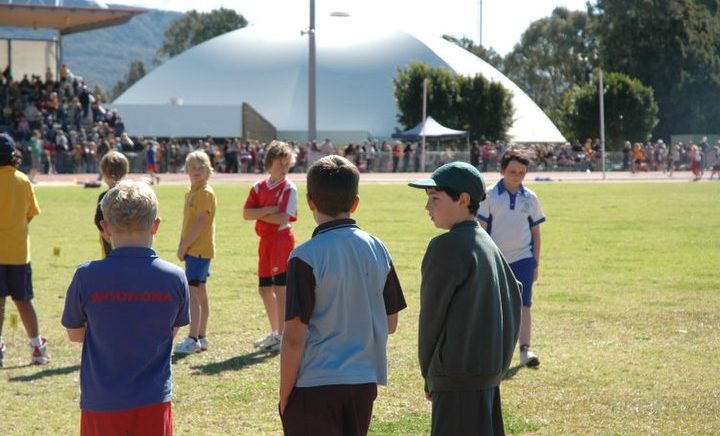 Nevan has just missed out on qualifying for the Regional Finals having placing 3rd in the District Finals; alas only the top two went through. I didn’t expect a whole lot considering he doesn’t own a discus and doesn’t train, I was simply happy and a bit chuffed that he was competing at representative level. It had been a bit of a shock that he won the event at school, but now he was up against a bunch of schools.

The little stadium was fantastic; running track with field events in the middle and a cute little grandstand made for feeling like a little Olympics. Obviously so much better run and coordinated than school events which made for an enjoyable afternoon. Upon Nevan’s event starting I re-located to the green banks on the opposite side with Hayden in tow to get a nice close look at the action.

Nothing extraordinary as I watched good competitors with good techniques and the right apparel (singlets, skins, etc.) versus Nevan who once threw in his Jumper! Silly boy, I got a bit closer and whispered to try taking that off. His first throw was middle of the pack stuff, landing roughly 11m (36ft) and therefore placing him about 10th. His second throw wasn’t as good and as he released his third throw I was setting myself to tell him how great he had done, tried his best and the fact that he had made it this far was such an accomplishment. You know how it goes.

But I froze. Out of absolutely nowhere he nails his final throw, my eyes lighting up as I watch it sail well past his previous throws, well past a number of other competitors markers. Finally landing, he superseded his earlier efforts by nearly two times as 19.92m (65.35ft) was the recorded distance. No kidding, the moment of madness earned Nevan 3rd in the entire District and his first ribbon at representative level. Yes, quite proud.

We would later find out that even though the top 3 or 4 go through in other events, Discus only takes the top 2 to the Regionals. He is on standby but we’re happy regardless.