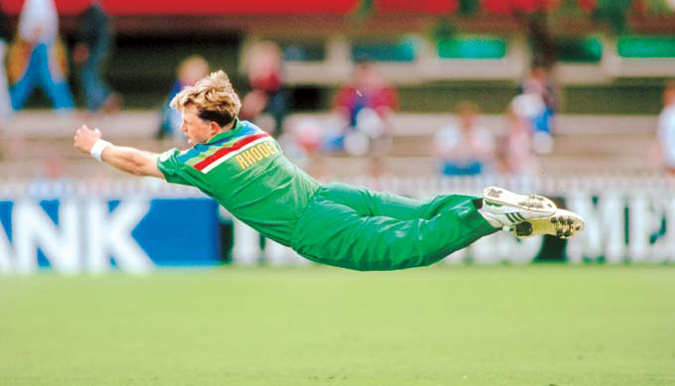 We won our match yesterday, first knock out game. I took the most amazing catch of my entire life!!! Imagine I’m fielding 50ft from the fence, a guy hits a towering shot real high in the air, I’m running back but it’s over my head, and at the last second I leap back, catch it one handed, (bare handed) and land awkwardly after getting total air… but it stuck so good that it never popped when I landed with a THUD! When I realized what happened I run with my arms in the air somewhere in the field, the rest of my team is running toward me but I think I ran so fast away from them they couldn’t keep up… I was so excited…

Robert’s (big guy from the West Indies) family was here from Trinidad on vacation watching, his dad said to me after the game, “Michael I will remember you for the rest of my life because of that catch..”

And the batsman told me after the game I almost brought him to tears in disbelief….

And then here’s an excerpt from the match report:

The stars of the day were Ray and Rob for their composed 34 and 28 respectively and the entire OWCC bowling line-up for maintaining an unwavering line-and-length.

The turning points were provided by Mike, first bowling Prakash with a zinger that sent the bails flying to halfway between 30 yard and the boundary and then absolutely, positively the best catch I have ever seen (including international cricket) that would have made Jonty Rhodes proud (had he managed to take that.)

(Jonty Rhodes played for South Africa, and was easily widely regarded as the best fieldsman ever…)